This article is part of the ANTIQUE PHONOGRAPH, GRAMOPHONE AND TALKING MACHINE IDENTIFICATION GUIDES.
SEE ALSO: Our listings of outside horn talking machines for sale.


The Victrola XVI had a long and honorable history, introduced in 1907 and having a production span of 14 years, according to Baumbach's book Look For the Dog. The version depicted here, with its L-shaped doors, is a close descendant of the very first Victrola, the VTLA.

The first version of the VTLA, with absolutely flat lid, morphed into a version of the VTLA with a typical Victrola domed lid. That second VTLA morphed into the early L door XVI shown here. All these machines were equipped with Victor's finest motor, a three spring motor with floating turntable, shared by the Victor Six. In keeping with the luxury appeal of these machines all the hardware except the turntable was gold plated.

In 1912 a revised version of the Victrola XVI appeared, minus the L shaped doors.

Most examples seen have appeared in mahogany, but here's an L-door XVI in oak. Fumed oak was also an option. 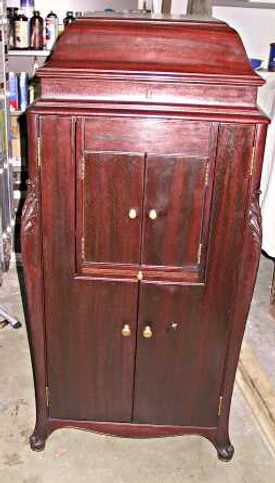 We buy, sell, and repair antique phonographs and music boxes.

Pick-up and delivery possible in many parts of the midwest, south, and northeast.